There's a lot of jibber-jabber today in Washington about "civility." Moscow Mitch today was bemoaning something he called "partisan paralysis." House Republican leader Kevin McCarthy said today that impeachment efforts were "divisive." And, the USA Toady published this today: Divided we fall? Americans see our angry political debate as 'a big problem'

Republicans have so far pushed the idea that the impeachment proceedings are due to Democratic butthurt that a reporter (from Sinclair Broadcasting, of course) today asked Speaker Nancy Pelosi today if she "hates" the preznit.

So I can tell you one thing I think needs to happen in order to pierce a little spit-hole into the divisive nature of American politics. It is a simple thing to be done, and it could be done by an entire political faction all at once, and it would create a wealth of good will in the American political discussions.

If you're not aware, the phenomenon is even laid out at Wikiepedia: "Democrat Party is an epithet for the Democratic Party in the United States, used in a disparaging fashion by the party's opponents. While historical usage includes non-hostile appearances, the term has grown in its negative use since the 1940s, in particular by members of the Republican Party—in party platforms, partisan speeches, and press releases—as well as by conservative commentators.[1]"

Using "Democrat" where "Democratic" would be preferred is a bullying tactic. It is not grammatical. And this practice alone is divisive on its face. So long as Republicans continue to employ this incorrect usage time after time, it will be difficult to leave divisiveness behind toward a more effective democratic republic.

Speaking of divisiveness, Republicans are outraged that impeachment witness, law scholar Pamela Karlan dared to invoke young Barron Trump's name as an example/mild joke. Here is what she said, as reported by Vox:

"Contrary to what President Trump says, Article Two [of the Constitution] does not give [Trump] the power to do anything he wants. And I’ll just give you one example that shows you the difference between him and a king, which is the Constitution says there can be no titles of nobility, so while the president can name his son Barron, he cannot make him a baron.”

I want to remind everyone that John McCain once stood up at a dinner and said this, attempting a joke: “Do you know why Chelsea Clinton is so ugly? Because Janet Reno is her father.” Chelsea Clinton was 18 years old at the time.

This was not that.

So, it turns out that Sen. Rand Paul, a Republican from Kentucky, is full of shit.

Paul appeared this morning on Meet the Press, where Chuck Todd asked him about Rudy Giuliani's involvement in this Ukraine jazz and if he found it disturbing. Paul, of course, automatically went to "but...but...the Democrats."

Rand repeated a stupid charge by the Preznit and told Todd: "Everybody is going after President Trump. Someone needs to actually, in an objective way, evaluate a letter from four Democrats that said to Ukraine, if you don’t keep investigating Trump, we will reconsider our bipartisan support for aid. That’s a threat and that’s the same kind of stuff they’re accusing Trump of."

Here is the letter. It does not mention foreign aid. It does ask three questions regarding Ukraine's then-reported involvement in the Mueller probe.

The letter was signed by three senators: Bob Menendez of New Jersey, who is a ranking member of the Senate Foreign Relations Committee; Richard Durbin of Illinois, who sits on the Senate Judiciary Committee; and Patrick Leahy of Vermont, who also sits on Judiciary. This was three senators, acting within the proper context of their committee assignments to inquire about possible obstruction of justice.

The current Preznit is accused of strong-arming a foreign head of state into backing an investigation into his own political opponent and primary frontrunner.

It is not the same thing.

Here is a really great breakdown of the outfits by the movie's clothing designer:

And also: 'Mean Girls' Day: Why Is October 3 Mean Girls Day On Twitter and When Did It Start? (Newsweek)

How to Fix a Vitamix

My life is such that this was a welcome revelation.
Posted by Aaron B. Pryor No comments: 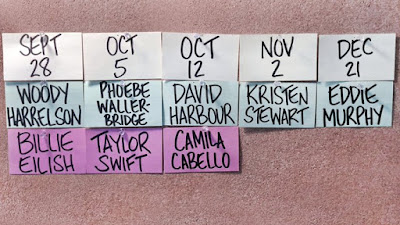 What Was That Promise That You Made