ABC News Radio was just doing a brief story on the new exclusion of American writers from the high school curriculum. The news reader referred to "Harper Lee and his 'To Kill a Mockingbird.'" Good idea, this excluding American authors from a kid's reading list. #harperleeisabroadyoumoron

But this weekend is about the wedding. My cousin who was in my childhood kind of a sister, well, her daughter is getting married, so that means a drive to west Pennsylvania.

My first stop rolling into town was the world-famous Edinboro Hotel. I had put off lunch in the interest of getting to have a nosh downtown before showing up at the house. Something light. Chicken fingers. And the barkeep brought popcorn. 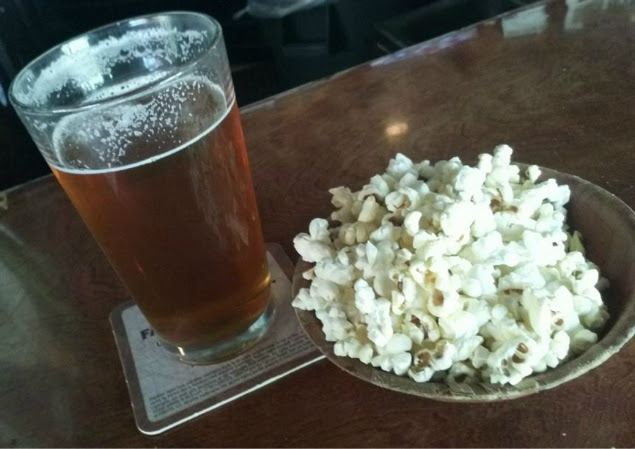 Edinboro is quiet and you can see the stars, and from my Gramma's howse you can see the lake, and it's pretty. So tomorrow there is a wedding and I have to sleep trying to be used to all this quiet.
Posted by Aaron B. Pryor 3 comments:

Email ThisBlogThis!Share to TwitterShare to FacebookShare to Pinterest
Labels: Edinboro

Today I cast it out as such: "It's official: I like this Pope."

I'm not one to won over by a Pope. I am descended of Catholics but never took the wafer myself; let me tell you, it's weird when visiting family out of town to be the only kid in the church to keep glued to the pew while the rest of the family goes up and experiences the miracle of transubstantiation. I'm thankful to my parents for keeping me out of that stream of effluent, however. It's made me, how you say, sceptical of ongoing theocratic movements, one of which the Pope is one of the world's most visible leaders.

But this guy. Likening man-made climate change to a sin! That should get some peoples' attention, eh?

By 9 p.m., you're suspended indefinitely.

I mean, the ink wasn't even dry on the change.org petition.

I won't reprint the comments here, though many seem to be transcribed on the petition. Most harmful was the notion that people in this boat are "nuts." The genius Kimberly derived this idea because Rochester's agreement to cover this area includes counseling.

I have news for you. Extensive psychological counseling is part of the transition process. More news for you, which might not actually be news for you as you sit at home in your jammies for the rest of the week: It is no longer okay to speak of this area as if it belongs on Jerry Springer.

This is evidenced nicely by this swift suspension. Well done, 98.9 The Buzz, a radio station I've never heard.