I'm So Glad We Had This Time Together

I didn't know it was a thing until I read about it on The Blue: Corpsing.

That would be what happens when you are a cast member and one of your fellow players forces you to break character and laugh. As defined: "Corpsing is a British theatrical slang word for when an actor unintentionally breaks character during a scene by laughing or by causing another cast member to laugh."

A compilation of these instances on Saturday Night Live has recently been circulated.

However, I say that an earlier generation of sketch actors makes these guys look like pikers when it comes to corpsing. Here's an example.

One last YouTube hat-tip to the reference in this post's title. Get ready to tug on your left ear:

A few nice "Orange Is The New Black" links from Buzzfeed:

If you are a Netflix subscriber and you haven't yet made it through the season of "Orange Is The New Black," you're wasting your $8 a month. Seriously. Cancel your subscription, then take $8 out of your wallet and go flush it down in your toilet. That's what it's like if you have the Netflix and you're not through "Orange" yet.

Sometimes, when a successful showrunner moves to the follow-up project from the smash hit that made them known as a wunderkind, bad things happen. David E. Kelley got progressively loonier until he's now with "Harry's Law," I guess, is that still on the air? Aaron Sorkin went the other way, erring too much in The Newsroom toward ponderous to be enjoyable. It can be a worry when a successful writer marches toward a new project. But from "Weeds" to "Orange Is The New Black," you may trust that Jenji Kohan has not lost one whit of her fantastic sensibility.

Having not read Piper Kerman's book, I don't know how custom-cut the stories therein were for the show, but Piper certainly seems like a perfect fit for Kohan; the WASPy suburbanite woman as fish-out-of-water, as being one who thrives on the razor's edge somewhat, as perpetually quite having it together as a result, and yet as a crafty, and sometimes explosive, survivor, yet not without an inevitable downward trajectory as a cost. Yesh, the similarities are uncanny between Nancy "Pants" Botwin and our new friend Piper Chapman.

But Chapman's character is necessarily subdued by a brilliant cast of characters who are there ostensibly to represent the faces of the terrifying reality one faces with a 15-month stint in prison but eventually to become just as rich, vibrant, and complicated a bunch as were the Botwin clan and allies.

Pay close attention to Uzo Aduba as Suzanne "Crazy Eyes" Warren (pictured, center). Know as you watch that this actress is an accomplished performer in musical comedy (Godspell). Then watch as Suzanne Warren evolves. I mean, all of these performances are like you might have come to expect if you're a hard-core "Weeds" watcher (and, if you are, you'll note a number of actors did carry over from that series). But Aduba is one to watch here.

Regardless of how good the ensemble, the real star is Jenji Kohan's perfect pitch. In the land of creative minds in television, nobody skates the line between the funny and the white-knuckling drama better than does she. This is stormy comedy at its finest and should not be missed.

And blasted, now we have to wait for season two. Though, I'm mighty glad it's coming.

Email ThisBlogThis!Share to TwitterShare to FacebookShare to Pinterest
Labels: Television

Man of Steel versus The Lone Ranger

I have recently seen two superhero genre films that took seemingly ancient and beloved source material and applied the ol' Reimaginer to it, the first, "Man of Steel," an ostensible attempt to rub a little smudge on the Superman myth, as was successfully done recently to Batman, and today, I went to see "The Lone Ranger."

Now, you might surmise from the art that has headed this blog for some years (which my Mother really likes, as she was both costume designer and photographer), Superman has long been near and dear as a story to me. My first allowance, in fact, was twenty-six cents per week, offered so that I could go up to the local five-and-dime and purchase the very latest Superman comic. I took interest in other costumed crime fighters, of course, but Superman was the core hero to me.

So of course I was intrigued by the notion of giving the "dark knight" treatment to our man from Krypton, and I was equally crestfallen to find that these moviemakers' idea was to take the Superman story and to apply it liberally with "Transformers" level CGI and encounter upon punishing encounter among super hero and/or villains. "Man of Steel" was the kind of film where I sat there begging for its end. It is not so much a bad film as it is a self-inflicted punishment.

And can we please tamp on the breaks with films that now feel free to appropriate September Eleventh imagery? Attention, directors: It's still too soon. We lived through it; you think we need to see it gussied up and ruling the big digital screen? "Man of Steel" is particularly egregious with this.

"Man of Steel" gets it right in spots, as in, it offers another viewpoint of the man Clark Kent was before he donned the cape, it bothers to reflect on what it would mean to be out in the world possessing that kind of power, and, for a while, it realizes that Clark Kent is just as interesting a character as is Superman, if not more interesting.

And, by the way: This isn't an "S," where I come from, it stands for hope? REALLY? FU, "Man of Steel." What a horrible back-bend of bizarre conceit.

So, how could that movie make 2.5 hours seem so painful, while yet my selection today effortlessly held my captive attention for the same time period?

"The Lone Ranger" is a marvel. It is a nearly perfect movie. I have been champing at the bit to see it for months, and it was not as good as I had expected it to be. It was 12 times better. This is a film that adores its source, that paces its story, that plays the action like a well-strummed theremin, that is comedic and dramatic and entertaining and that hits every note perfectly right on through the coda.

Much of this is a credit to Johnny Depp of course, to the point that the movie could probably be re-titled "Tonto." Casting the story with the sidekick as the brains of the operation is a brilliant turn of the wrench, and, when you think about it a minute, makes a lot more sense anyway. And it's this kind of rethinking of story, this wonderful effort at more heavily detailing this canvas, that makes "The Lone Ranger" a more than welcome update.

I know, I know, I know. Some reviewers have panned "The Lone Ranger." I have seen such reviews, and I do not understand them. What I know is that I have seen two perfect movies this year, the first being "Django Unchained," and the second, this wonderful, fun, thoughtful film that reinvigorates a show I watched in reruns on the tube as a kid and that gathered reverence from guys like my Dad and my Uncle Hat.

Eschew the reviews. Go see "The Lone Ranger." And, do not waste your time with "Man of Steel."

Next on my list: "The Heat" and "20 Feet from Stardom."
Posted by Aaron B. Pryor No comments:

Email ThisBlogThis!Share to TwitterShare to FacebookShare to Pinterest
Labels: Movies

That you know Justin Bieber but you don't know Linda Morabito is a crying shame. Morabito is the first person to ever have noticed geological activity on a body outside of the Earth. Her discovery led to the realization that the Earth is not indeed the most geologically active body in our own solar system.

That's what I said: The most geologically active object in the solar system isn't Earth. It's not even a planet.

It's Io, one of Jupiter's Galilean moons.

Io is the closest of Jupiter's satellites and therefore is affected by tidal forces caused by Jupiter's massive gravitational power and "orbital resonance" with its larger moon friends Europa and Ganymede.

We've known that Io existed since January 7, 1610, when it was discovered by Galileo. But we've only known it has volcanoes since 1979, when Morabito looked at pictures of the moon and saw this enormous plume. Nobody else was really looking at the moons because they were busy with Jupiter, but as it turns out, Jupiter's moons are, how you say, KICK-ASS.

That was the first discovery ever of volcanic activity anywhere in the universe besides Earth.

Email ThisBlogThis!Share to TwitterShare to FacebookShare to Pinterest
Labels: Science 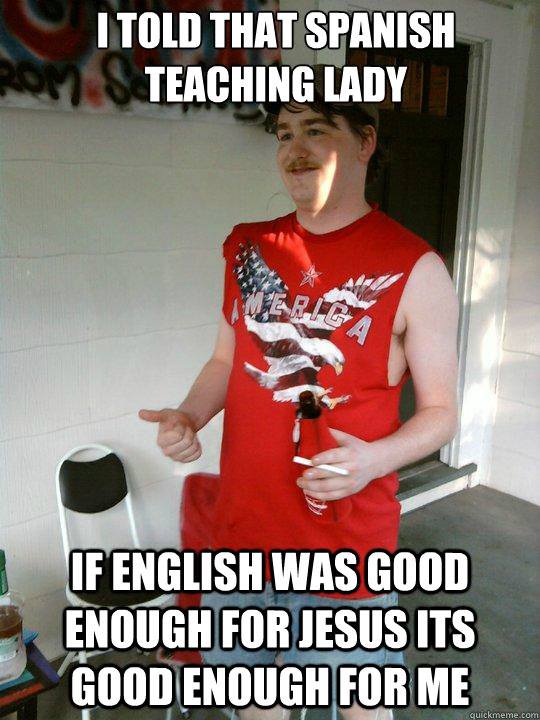 I'm so glad that Elantra in the garage that I keep mistaking for my own car wasn't my own car. That owner is going to get a nasty surprise today, in the form of a post-it note that says "the license plate of the car that hit you is..."

Ugh. That and the weird way the couple of to-go boxes were piled near the back tire. Somebody had quite a party there, just hanging out in the garage.

I'm going to have to start parking on 3 instead of 2.

I distinctly remember the first time someone used the ol' "freedom of religion not freedom from religion" line on me. 1993, maybe? It sounds just as terrifying now as it did then, especially when it's coming from state executive types who have actually been considered for the White House.