The Cheese Table and Other Adventures

This was a banner day.

The mobile phone I previously used, an LG Marquee, was originally purchased as a point-of-entry phone to a new mobile service. I did not want to buy a higher-end phone at the time until I had faith in the carrier, Ting, a Sprint MVNO that has rates a human being can actually understand. The coverage is generally good, although it can get touchy when I'm out at Gonfalon. But that is the case with many carriers; some sort of hole or triangle seems to have converged on that spot that zaps mobile phone signals.

Anyway, the Marquee has gotten mighty sluggish of late, and I decided it was time to upgrade. Today I took delivery of an iPhone 5 (one new development with Ting for the last year or so was its ability to carry certain models of iPhone). I had forgotten what a difference it can make to have a good phone. I'm sure I'll be bugging people with panoramic photographs soon enough (can't wait to shoot one out at the farm).

Dad also helped me deliver two key pieces of furniture today; my office chair and this short table that Hic found for five bucks and that my Dad stabilized mightily with extra nuts and bolts. I have needed a piece in my studio apartment to give me just a little bit more counter space. This is that piece. It's perfect. 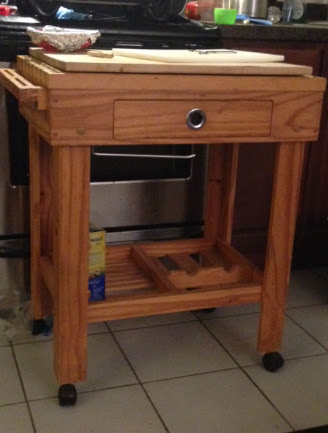 I will most often use the thing for preparing the cheese and Triscuits snack that so often fortifies me. So it's a "cheese table" to me. What it means though is extra counter space, an extra drawer, another shelf, and all that at a size that isn't too obnoxious.

We ended the day with blackened catfish, sweet corn from a farmer's stand that may be the best corn I've ever eaten, and broccolies right from the back yard. A bannner day, indeed. Did I mention how beautiful the weather was today?
Posted by Aaron B. Pryor

Thanks for the pie.